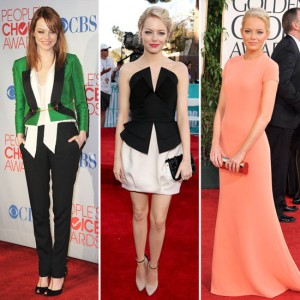 Emma stone went from being super good in “Superbad”, to skyrocketing to the top of the fashion world. And she’s only 24! In her short time in the spotlight, she’s gone through quite the style overhaul. The 5’5″ Emma Stone has been crowned Hollywood’s most stylish star of 2012 in a poll by a British magazine.

The actress’ unique girlish and quirky fashion sense brought her top honors in the survey by editors at InStyle UK, who placed her streets ahead of rivals including Victoria Beckham and Kate Moss. German actress Diane Kruger is in second place, beating Twilight star Kristen Stewart into third and TV presenter Alexa Chung in fourth.